The biggest mistake people make with their sales pages 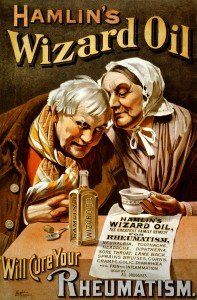 Snake Oil, by the gallon. (photo via clotho98 on Flickr)

On today’s internet, hype breeds faster than rabbits on Viagra. It’s tempting to join in the clamour – shout your claims from the rooftops in a desperate attempt to be heard. There’s just one problem: only fools buy from a huckster.

If you’re selling snake oil or get-rich-quick scams, you’ll likely find there are enough fools to go round. But if you have a legitimate business that delivers genuine value, then you need to avoid  unbelievable claims and false promises.

As a copywriter, I see a lot of people making a fundamental error in the way they pitch their products and services. It comes down to a simple rule:

If it sounds too good to be true…. then it probably is.

If someone’s offering you a way to make easy money then you’re right to be suspicious. If someone claims their online course will make you rich, or have you earning thousands of dollars a day in no time, then being wary of such claims is only natural.

If it sounds too good to be true…. then it probably is

There’s a simple rule I often use when shopping around, on the internet or out in the world in general. It’s a bit of an admission from someone who makes his living by writing stuff for the marketing departments of corporations, but here it is:

The slicker the marketing, the worse the product.

The slicker the marketing, the worse the product

Now, clearly there is a middle ground where sensible and legitimate businesses invest in their products and services and then promote it with balanced and generally true marketing messages. However, those with a great product are better placed to also rely on word of mouth, while those with garbage to sell focus all the attention on their big, fat ‘BUY’ button.

Even putting the morality aside, trying to sell garbage with false promises is a strategy with a short shelf life. It only  works consistently well when you’re selling impulse buys to people with more money than sense. It’s unlikely to work when selling business-to-business. And in the age of social media, word quickly gets out.

So, if you’re writing sales material remember not to over promise. Don’t make claims that people won’t believe. If you make people suspicious, you’ll lose their trust, and the sale. Focus on the real benefits, the real value.

The trick to copywriting is finding that true value, and highlighting it in a way that catches the attention of those who will genuinely benefit from it.

I’m not saying that’s easy, or that it leads to instant riches. But at least it’s honest, and in the long run, it’s better marketing.